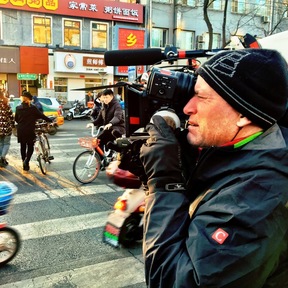 Tom Curran is an Emmy award-winning cinematographer who has filmed on location around the world.  He is also the owner of Curran Camera, Inc. renting 4K cameras featuring Arri’s Alexa Mini and Amira along with Fujinon Cabrio Cine Zoom lenses. Recent credits include Tidying Up with Marie Kondo for Netflix, Ugly Delicious for Netflix, Fish My City for National Geographic, and 9 Months hosted by Courteney Cox for FaceBook.  Tom is known for filming in extreme locations like Alaska, Belize, Thailand and the Arctic.  He's happiest hanging off a glacier or helicopter or sailboat to get the best shot. Curran is also well versed in subtle and nuanced lighting and has photographed celebrities like Sarah Jessica Parker, Nicole Kidman and Anna Wintour. Curran studied at The American Film Institute, and lives in Los Angeles.