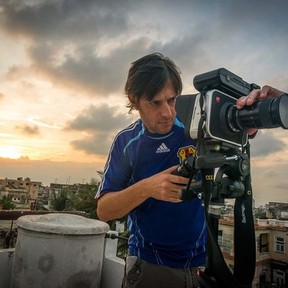 Originally from Mexico, Armando Croda has been working in art and film in the US, Europe and Mexico for the past decade. He is a cinematographer and editor of the feature documentary HAVANA MOTOR CLUB (Perlmutt Productions, 2014) directed by Bent-Jorgen Perlmutt. Co-director, Cinematographer and Editor of the documentary LOS COJOLITES, A LOOK INTO SON JAROCHO MUSIC (Viento del Norte Cine, 2014) for Canal 22 International in Mexico. Currently he is working as Co-director and editor of his feature documentary FIRMES about a group of Mexican undocumented immigrants who have left the gang life and formed a Lowrider car club in the Bronx. He completed the feature film, VICTORIO (2008, DMM Films) as Co-Director and Editor, which was awarded the Opera Prima at the Guanajuato Film Festival, and screened in various festivals in Europe and Latin America, including Valencia, Huelva, St. Petersburg, Havana and selected for the Human Right competition in Bilbao festival.

KOLYA'S WORLD • 3 years ago.
Armando is really nice. We had no issues renting to him. We hope to see him again soon.
See More

Sam Baumel • 6 years ago.
Armando was very responsive and responsible. Looking forward to renting with him again in the future.
See More

Sam Baumel • 6 years ago.
Armando was very good with communication. He was on time and treated the rig with care. Definitely recommend!
See More