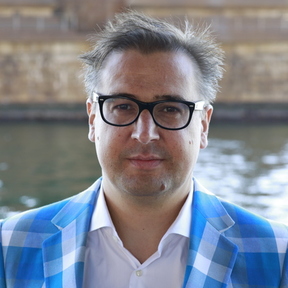 Volker Goetze is a New York-based trumpeter, composer, and filmmaker. He has performed and presented his work at Carnegie Hall, the Kennedy Center, Paris Jazz Festival, WDR Cologne, Gasteig Munich, Jazz-A-Vienne, World Festival of Sacred Music (Los Angeles), Caixa Forum Madrid and the Opera Festival in Munich. His work fuels cross-cultural dialogue, incorporates multiple disciplines and utilizes cutting edge technology. His compositions derive from folklore music, rock, jazz, contemporary music, classical as well as baroque music. He has been investigating the oral culture and storytelling of West Africa and its influences on Jazz and Black culture in America. GRIOT, a feature documentary about the oral music tradition in West Africa, is Volker Goetze's debut as a film director and has since developed into a multimedia performance symphony documentary. GRIOT opened theatrically throughout Canada and further releases are scheduled in the US and Europe for 2016. Mr. Goetze held many master classes and was invited as a panelist from such distinguished institution as the Apollo Theater and the New York Foundation for the Arts.