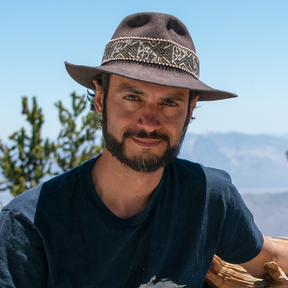 Mateo Hinojosa (M.A. in Documentary Film, Universidad del Cine in Buenos Aires; B.A., Northwestern University, summa cum laude) is a filmmaker, photographer, educator, and artist. A Bolivian-American based in the SF Bay Area, he works worldwide. His films explore issues of ecology and art; spirituality and health; social justice and education; politics and performance; indigeneity and mestizaje; and individual identity in collective struggle. Specializing in channeling collective voices and visions into articulated creative expression, he has facilitated storytelling through cross-cultural documentary production, theater, and other modalities, with many diverse groups ranging from Native American urban youth to Argentine transgender prisoners. His debut feature documentary, Spectacular Movements, follows young indigenous actors in urban Bolivia as they revive the spirit of the recent revolution through manifesting the dead and demanding justice in theater and street interventions. He is the founder and director of Woven Path Media, which specializes in collaborative creation, documentary production, education and facilitation. He is also the Media Director at The Cultural Conservancy, where he has had the honor to work since 2013 in documentary production and training with intergenerational and international indigenous communities.