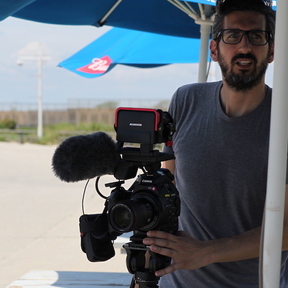 I've been producing, writing, shooting and editing non-fiction content for over 20 years.

I started my production company, CaveLight Films, in 2010 with the aim of creating media that has a positive social impact. Some of our clients include FOOD NETWORK DIGITAL, GOOGLE, HYPER MARTIAL ARTS and a wide-cross section of non-profits, start-ups and various organizations. http://www.cavelightfilms.com/workhome/

Before starting CaveLight Films, I wrote and produced numerous TV and documentary projects for Travel Channel, A&E Network, Discovery Channel and Animal Planet, as well as produced TV commercials abroad for brands that include Adidas, Samsung and Head & Shoulders. I also occasionally do freelance video work for the New York Times, Wall Street Journal, CNN and other outlets.

In October, 2016, I directed and released my first feature length documentary film, THE COST OF CONSTRUCTION. The film investigates a string of controversial deaths in Las Vegas during the construction of MGM's CityCenter, the most expensive private construction project in US history. The film unfolds to look at worker safety nationally, revealing a pattern of negligence at the highest corporate and government levels. http://www.thecostofconstruction.org

In between producing videos and renting out gear, I teach an after school program, teaching documentary film to Brooklyn middle school students. We make a five minute doc each semester. Check out our site to see some of their work!

Marvic Paulo • 2 months ago.
Jordan was very responsive to the booking, flexible and accommodating with pick-up and drop-off times. Thanks!
See More

Margaret Sarro • 6 months ago.
Equipment was great and Jordan was easy to work with.
See More

Gian Bello • 1 years ago.
Everything went smoothly, super helpful with teaching me how to use the equipment and flexible with pick up times!
See More

Marie Louise Taarnskov • 2 years ago.
Jordan was super friendly in answering all my questions, very helpful in terms of offering advice about the recording equipment and flexible in terms of pick-up/drop-off. Would definitely recommend!
See More