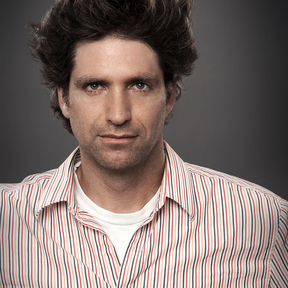 I was born with a movie camera in my hand, and fortunately for my mother it was a small super-8 and not a betacam. Fortunately for me, it was great for stop motion — perfect for my Star Wars action figure collection. Jump ahead to film school at Northwestern (with a double major in Anthropology), and then film crew in the Chicago production scene.

Along the way, I picked up a Mac and learned gobs of graphics. Soon enough, I found myself at Industrial Light & Magic’s Art Department. Los Angeles beckoned with her sweet So-Cal song, so I headed down to work in the blossoming motion graphics scene. Starting as an animator, I soon became a designer, Art Director, eventually becoming a Creative Director at The Famous Group for 3 years.

I have a passion for storytelling, and love to mix live action with beautiful graphics, typography, and vfx. I have years of experience in commercials, music videos, broadcast, and digital – picking up awards like the Telly, FWA, and SXSW filmfest; with an array of clients such as Gatorade, Cisco, Dairy Queen, Sprint,and Nike.

I am currently a Creative Director at Buster Design.

Before Infinity Productions • 4 years ago.
Joel was a very nice guy, and the gear was returned in perfect condition. He was a good communicator and made the necessary adjustments to his schedule to ensure a timely drop-off.
See More