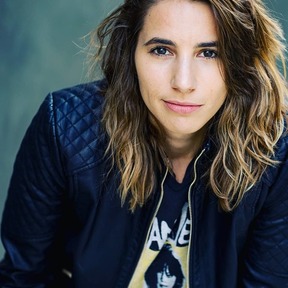 I am a freelance filmmaker and writer and love bringing projects to life. I am a headshot photographer, a spoken word artist, and a videographer.

Verena Puhm, onset commonly called “V” by her crew, is an Austrian native director, writer, and actress, who has written and directed award-winning shorts and commercials in Europe. At the age of 26, she created and taught the university master class “Directing Actors” at the University of Applied Sciences Salzburg, Austria, as one of the youngest teachers in the history of the university. At the same time, she was hired as an acting teacher at the Performing Arts Studios Munich, Germany.

As a director, producer and writer, “V” gained a huge audience with her short films and commercials all over Europe, Asia and the U.S., which commanded worldwide notoriety with the “ADC Award Germany”, ”Grand Prix Victoria Award”, "Tricky Woman Award Nomination”, "Future - The Young Film Award”, “Salzburg Country price” and more, and numerous nominations globally. Her recent work includes assistant producing and copywriting the renown German TV Shows "The Big Surprise” and “Mission Impossible”, and directing a cinematic turn-over feature film "BOX204" based on the homonymous dance theatre piece by choreographer Sergej Pumper, which will be released in 2019.

Verena has landed coverage in print and broadcast outlets, including the german Rolling Stones magazine. Her own articles have been featured in Starlight Music Chronicles Magazine and in her blog www.thehollywoodgirl.com, in which she helped young international filmmakers to move to L.A. and work in the Hollywood industry.

Verena holds an MA in film from the University of Applied Sciences Salzburg, Austria, and an acting diploma from the Munich Film Academy, Germany. In her bachelor thesis, “V” investigates the oftentimes problematic communication between director and actor in the creative process, combining directing strategies with classical communication models and semiotics. Searching for the possible existence of a “female gaze”, a counter-gaze to the dominant regime in cinematic reception–the “male gaze” in classical narrative cinema–“V” opens up the concepts of ‘manliness’ and ‘womanliness’ on the grounds of a postmodern and post-structural discourse in her master thesis “The (fe)male gaze”, banding together feminist film theory and postmodern and poststructural feminist theories.

In addition to her extensive academic background, “V” is also writing the biography of her grandmother during WWII in Yugoslavia (today’s Croatia) and a relationship guide on how women can learn to gain their self-esteem back to heal their love relationships, based on her own personal life story.

As one of the leading female freelance filmmakers in Austria, “V” was invited to the panel discussion “Women in Film” in Salzburg, Austria, in 2015, to talk about her experiences and position as being both, a director and woman in this industry. She is currently the (only female) vice chair at the GABA Film Initiative, an L.A.-based non-profit organization that aims to connect German and American filmmakers, supported by the Consulate General of Germany, the German Film Commissions and native German Hollywood Director, Producer and Honorary chairman of the organization, Roland Emmerich.

Great prices and friendly professional service. The wireless follow focus was phenomenal and was incredibly useful on the shoot day. Highly recommend renting with her on your film projects.

Verena was amazing. She gave us a great deal and because of this rental I learned to use the Ronin M. She was willing to work with our schedule and I'm incredibly thankful. I would highly recommend.

Verena had great communication and everything was done smoothly. Thank you!

Verena was great and the C stand was in good condition.

Verena was awesome! Would rent again.

Everything went well. Lens was in great shape. I would definitely rent from Verena again.

Verena's Canon 100mm Macro Lens is in perfect condition and works great, loved the lens and she made pick up and drop off extremely easy!