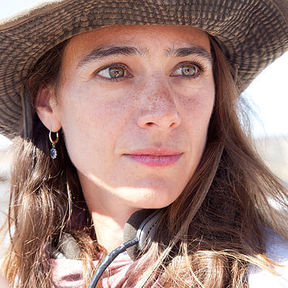 As a Cinematographer, Stephanie has hung from a helicopter over the night-time waters of Puerto Rico to document the rescue of 90 passengers on a Yola, hovered over the Canadian Rockies in below freezing weather only to find her safety belt became unhooked mid-flight; hung from a crane in Malta over hundreds blood-thirsty zombies; followed illegal aliens on horseback in the Arizona desert, Latin American rock stars in L.A. and sex-crimes detectives in Florida; shot a supernatural thriller in the deserts of Morocco, a Bollywood musical in Mumbai and a love story in Mexico. Adventure and cross-cultural experiences have marked Stephanie Martin’s career in film from the get-go.

Born in Sao Paulo and raised mostly in Buenos Aires, Stephanie discovered her passion for film while at Wellesley College where she studied French and Political Science. Following graduation, Stephanie moved New York where she began as a set lighting technician in independent films before attending the American Film Institute to earn her Master of Fine Arts degree in Cinematography. She has worked on features, shorts, documentaries and commercials all over the world, amongst them Daniel Myrick’s The Objective and Under the Bed and most recently as operator and second unit DP on Ryan Murphy’s Eat Pray Love and on Marc Forster’s World War Z.

Adding to her career as a Cinematographer, Stephanie recently completed the prestigious Directing Workshop for Women Program at the AFI where she directed her first short film, Wild Horses which screened at festivals world-wide and won Best Live Action Short at Palm Springs. Stephanie is currently developing a feature length script based on the short about the plight of wild horses in the Western United States.