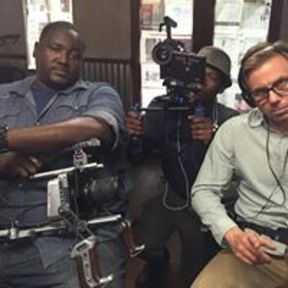 Romane Simon producer of Dream i never had, blood runs thick, hybristophilia,the downside of Bliss to name a few, Simon a young filmmaker connected with this open door to greater creative possibilities in Haiti where each day of his life was met with a storm of political unrest. He was determined to get to the place where he could paint his own screen stories and images he hungered for the world to know about.

Simon finally arrived in Hollywood and quickly settled in an area where many young people find it economical for survival. He quickly made himself known among others who had a similar passion for film which resulted in a new world of cinematic magic. His dream took root and before he knew it, he was yelling “ACTION!” And his filmmaking dance began.

This was only a few years ago and Romane has continually directed short and feature films making the industry feel his artistic power and passion for story-telling.

His latest feature film is “Life of Gia” based on a true story about a girl who loses her family at the age of eight in a car accident. The driver of the car is an out of control drug addict. The young girl is forced to live with her an aunt who eventually dies of cancer forcing her to live with a grandmother who is also dying. Her need is to survive as well as take care of her grandmother who is the last important person in her life on the island; she is determined to find some kind of job in order to make life plausible.