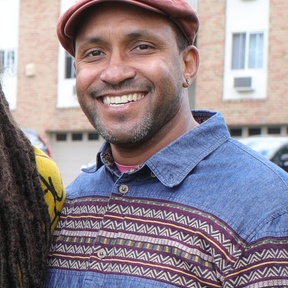 Robert W. Gay was brought up in Queens, NY. Born to be a

visionary and storyteller, Robert has always had a passion for the

expanded his passion for film making. There he met the likes of

Spike Lee and developed the films “Do the right thing” & “Mo’ better Blues”. Through

experience, he gained the knowledge needed to start his career in broadcast media. He

Generation” that became a staple feature in many inner city schools till this present day.

As a result of Robert’s gathered experiences on the field, he has created his own entity,

Tehuti Films LLC. His integral work has produced astonishing motion pictures such as

“Reflection of a Blessed Soul, Maya Angelou” & “Voices of the Voiceless, Mumia Abu-

Jamal”. As Creative Director, he devotes his passion for journalism and cultural

awareness to funnel his sights on documentary film production. Sharing in the creative

vision is his wife, Akhmerit, who is co-editor and producer at Tehuti Films. She is

production. The power couple team has assembled a new body featuring projects with:

Isaac Park • 10 months ago.
Robert took great care of my gear. I would rent to him again!
See More