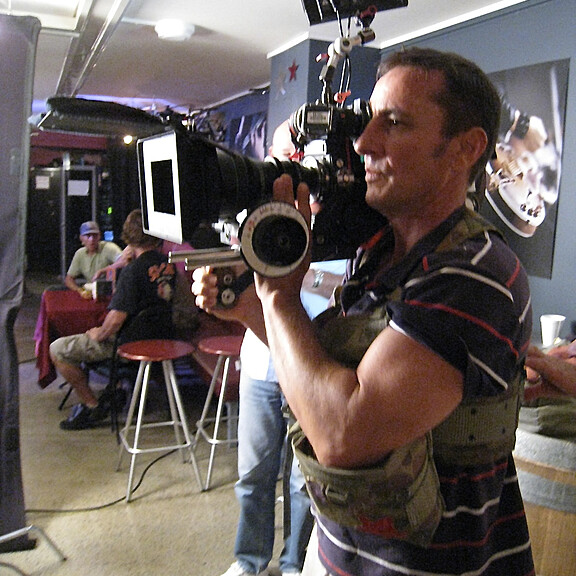 Director of Photography based in Melbourne, Australia.

I fell in love with single-frame animation at primary school aged 11 and received a grant from the Australian Film Commission to make a short film when I was 14. About then, I also fell in love with surfing and bought a Super 8 camera which I took to Indonesia after high school to document my travels.

I completed a BA majoring in Film & TV at Curtin University in West Australia and then worked with a wildlife documentary unit for a TV station, STW 9 in Perth, then as a cameraman for Perth's largest production company, Western Images, for nearly 3 years. I worked on a mixture of 16 & 35mm TVC's, some for national and international clients and industrial/corporate docos, often flying to the Northwest of WA to film on offshore oil and gas rigs for Woodside or to iron ore mines in the Pilbara and the goldfields.

I've since worked as a freelance Director of Photography for over 20 years including assignments in countries such as Mexico, Costa Rica, Morocco, Mozambique, Sth Africa, Indonesia, French Polynesia, Peru, Chile and Brazil as well as Europe, Fiji and the United States.

I have an affinity with the ocean and have worked as DOP alongside Jack McCoy on 4 surfing docos he directed, and 2 feature films. I've made several surf docos including the internationally-released Rip Curl film 'Stomp.' A film I made for Red Bull called Miles From Anywhere which was nominated for Best Surf Video in 2020 at the Surfing Australia awards as was the doco I made about legendary indigenous surfer/shaper Maurice Cole which won Best International Short at London Surf Film Festival

I've shot more than 100 TVC's, many on 16 & 35mm film as well as digital formats and won the Perth Art Directors Club award for Best Cinematography in a TVC. A TVC I shot was nominated for a Gold Lion at Cannes.

Currently own a RED Epic W Helium 8K camera. I enjoy working with people who are passionate about achieving their vision. I play the guitar and sing even when others try to stop me!