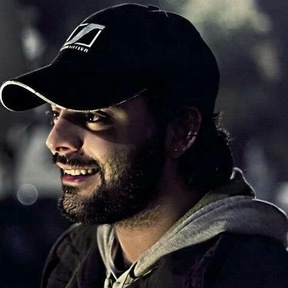 starts his cinematic career as boom operator in

as sound recordist on the movie “Cara ti Amo” (Gian

Paolo Vallati, 2011), winner of the first prize at the RIFF international Festival, and on the documentaries “Il mio Novecento”(Carlo Lizzani, 2010) and “The earth: our

winner of the Golden Globe for Excellence. He continues

his passion for sound, but he also starts to cultivate his interest in the directive field; he dedicates himself to

various independent projects. Among these we find

“Roma sparita”, the short movie “Aldilà del mare”, music videos, and the trailer for “Gli occhi di una vita”, for which he wins for best motion picture project at the 2012 Rome’s

"Behind The White Glasses" (Valerio Ruiz) about the life of Lina Wertmueller.

In 2016 then directed the short film "Fallen Angels" (Angeli Caduti) taking on the theme of the death penalty.

Shortly after, he moves to Los Angeles to enrich his cinematic experience and to follow the love of his life.

He directs his first short film abroad "Click" in 2018.

He had started to work on a story 10 years before, which he brought with him to his new hometown and which he further

develops and adapts in Los Angeles mixing the Italian neorealism with the American action genre.

He is now in the producing phase of this first feature film, “A LIGHT IN THE DARK”.