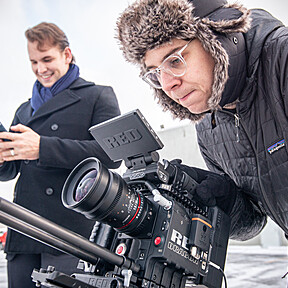 Quinton Oliver Smith has been working as an Alaskan filmmaker for the past 9 years. His films have a wide variety of genres, from comedies to dramas to documentaries or even science fiction. Some of his most notable work for directing and producing include “12:34” (2019), ”Sudsy Slim Rides Again (2018),” "Atomic, MS: 50 Years Later (2017),” "The Ruthless Rhymer (2015)” and more. His work has been showcased in the Anchorage International Film Festival the past five years, as well as numerous other film festivals across the world, including Festival de Cannes for "Buffalo" in 2016. In 2018, his short film "Sugar Panda" won the Audience Choice Award at the 24-hour Film Royal competition. Outside of running his own business, he’s the Vice President of Alaska Filmmakers, a local non-profit organization dedicated to creating, educating, and sustaining the Alaskan film community.

Based in Anchorage, AK