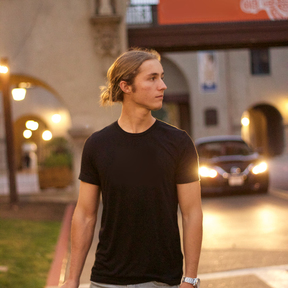 Jonny Santana has pursued filmmaking since he was four years old. His elementary school recognized his passion for filmmaking and in sixth grade gave him the resources to create a television series that would play bi-weekly for all 600 students at his school. In middle school he followed filmmaking into several contests and won multiple prizes for his short film work. He continued to create short films until his sophomore year in high school when he decided to follow in Spielberg’s footsteps by writing and directing a Feature Film before he graduated high school. It took Jonny a year and a half to complete his first feature “Fruit Juice”. It premiered at the Ken Cinema in San Diego for his community. Immediately after he began work on “The Empty Iris” his second feature film. By the end of the production he had worked with over a hundred cast and crew members and nine local San Diego bands. It took him and his team a year and a half to finish the film and it premiered in Balboa Park’s Museum of Photographic Arts. Since then “The Empty Iris” has screened four times in San Diego. Shortly after Jonny worked with Los Shadows on a short film “Lisa’s Sheets” and Jairek Robbins on a Docu-Series. Currently he is getting ready to shoot another short film “Spill Milk and Cry” and developing his third feature film- which will begin shooting at the end of this year.

Joseph Adams • 3 years ago.
Everything went amazing! Jonny is one heck of a guy! I expect great things from him in the future.
See More

Mick Wood • 3 years ago.
Easy to work with and communicates very well! Would rent to again!
See More

Beard Bates • 3 years ago.
Jonny was an awesome guy! He also returned the gear in great shape and was a real pleasure to deal with. 5stars all the way
See More

R, Nariya Inc • 3 years ago.
Very good guy and the rental went off without a hitch. I look forward to working with Jonny in the near future.
See More

Anthony Nguyen • 3 years ago.
Everything returned in great condition and on time. Very easy to communicate with!
See More