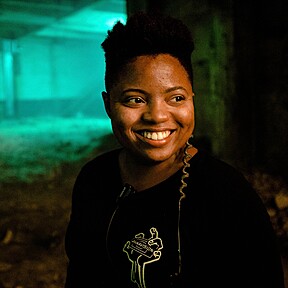 Jenise Whitehead earned a BA Spanish from San Francisco State University after studying abroad in la Universidad Complutense de Madrid. Upon her graduation, she co-directed "Gideon's Cross" in Outfest Los Angeles’ OutSet program. The film screened at Outfest Fusion, Outfest LA, Outfest Santo Domingo, Outfest LA Online by DirecTV, Models of Pride, as well as private screenings at APA Agency and Pacific Theatres at The Grove. She then trained in Panavision Hollywood’s two-year program and joined IATSE International Cinematographers Guild Local 600. She was chosen out of 700 applicants to study in American Film Institute's inaugural Cinematography Intensive for Women. Recently, Jenise Whitehead was welcomed to American Film Institute's Class of 2023 as a MFA Cinematography fellow. As a cinematographer, Jenise intends to lens stories that reflect being Black, female and queer in South LA, to humanize an experience that has yet to be fully explored in cinema and is often marginalized in society.