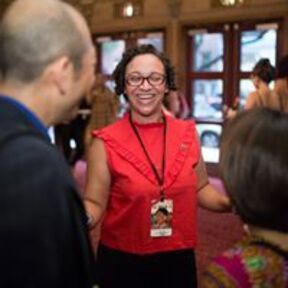 As Founder and Director of the Venezuelan Film Festival (launched in New York City in 2013), Irene Yibirin is a tireless advocate of the arts and their importance in everyday life. Aside from her leadership role at the Venezuelan Film Festival (VEFFNY), where she spearheads the festival’s creative vision and direction, she is also Co-Founder and Director of Development at Maravilla, a New York-based organization dedicated to raising public awareness of South America through film and the arts.

Born in Stanford, California, Yibirin cites her mother as a driving force in her steadfast determination to forge ahead. Recognizing the transformative power that the arts can have in today’s fast-paced world, she actively encourages young people interested in becoming filmmakers to develop as many skills as possible. Before VEFFNY, Yibirin acquired her own skills and experience working as an Audio Visual Coordinator and as Film Festival Coordinator at the Iberoamerican Festival of Short Films VIART, and the National Venezuelan Film Distributor Amazonia Films, respectively. Irene production experience also includes working as a Production Assistant for the Oscar-nominated (2011) and Sundance Film Festival-winning (2010) documentary GasLand.

Full of boundless energy, and known for her fearless and visionary ideas, Yibirin has also produced a number of films, including the feature film Refuge (2013), which is currently participating in several international festivals. Yibirin oversees production and curation of the Venezuelan Film Festival and plays a central role in defining its mission and actively growing it to new heights. She studied Production Design at the School of Visual Arts in New York City

Irene was super easy to work with and took well care about the gear. There is nothing I could complain about. Anytime again!

Great renter! smooth exchange and took care of gear. Pleasure to be of service!