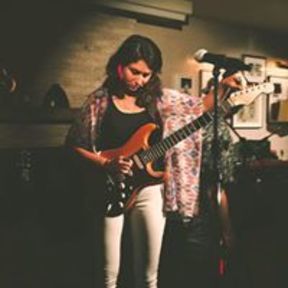 EREZ is a singer-songwriter and guitarist originally from New York who moved to Israel with her family as a child. After being an integral part of the music scene in Tel Aviv for a few years she relocated to Los Angeles.

At 18 years old, Erez met music producer Ori Winokur (Asaf Avidan, Avishai Cohen, etc.). Working intensively they formed the characteristic sound of her debut album PROPER LADY: Soul, Jazz, Funk, with jagged edges of Rock 'n' Roll. According to rave reviews in ‘Time Out’ , ‘Haaretz Newspaper’ , ‘Ynet’, ‘Walla,’ and many more - PROPER LADY demonstrates powerful female musicality. She was hailed as one of the freshest and innovative singer-songwriters on the musical scene.

PROPER LADY was endorsed by ACUM (Israel's largest artists' rights corporation), and was named among the top 20 albums from Israel in 2015 by Beehype. Soon after the album came out she was named as one of Israel’s top young female vocalists by the prestigious ‘AT Magazine’. The first single off the album, ‘Blending in the Universe,’ was featured in an episode of ‘CONNECTED’ - an AOL series. Two of her videos were featured on Israel’s leading music video channel playlist for two consecutive years and she appeared on Balcony TV’s world channel. In March 2016 the album was released worldwide on vinyl by Feedbands, an awesome boutique music company out of Asheville.

​Erez and her band toured the East Coast in the Fall of 2016, performing at the Kennedy Center, Soho House, Manhattan, and a Sofar Sounds 'secret' show, along with many other venues around NYC.

Erez is working on new material and is constantly looking to expand her creativity beyond her comfort zone. Her songs are strong on lyrics (in English) and groove. She believes that being authentic in her music enables people to relate and connect, which is a way of encouraging love and empowerment in their lives.

Eric DeHaven • 4 months ago.
Rental went great, we will happily rent to Erez again in the future
See More

F22 Studios • 4 years ago.
Erez took great care of our gear. Would definitely rent to her again.
See More