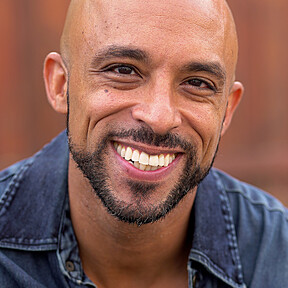 David has over 90 IMDB credits 18 IMDB producer credits, 12 writers credits and is the founder of Exertion Films. He is an active voting member of the Academy of Television Arts and Sciences and a 12 year member of the National Association of Latino Independent Producers.

His latest release ALL OUT DYSFUNKTION! (HULU / Amazon Prime) David wrote, produced and stars in the picture. Critics are hailing not only the film but also the screenplay. He was awarded the prestigious "Producers Mark" (p.g.a.) for his work by the Producers Guild of America.

He is currently in production on his 5th feature CATALYST (directed by Emmy nominee Christopher Folkens) starring Patrick Kilpatrick, Michael Roark, Noel Gugliemi, himself and more.

Also nominated for the prestigious Imagen Award (considered the Latin Golden Globe) for his writing and acting in the acclaimed film Our Vows. His original screenplay “CAR” was nominated for the Golden Palm Award at Beverly Hills International Film Festival.