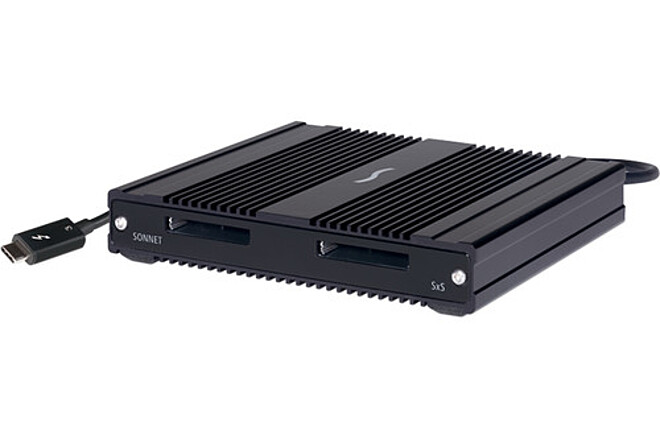 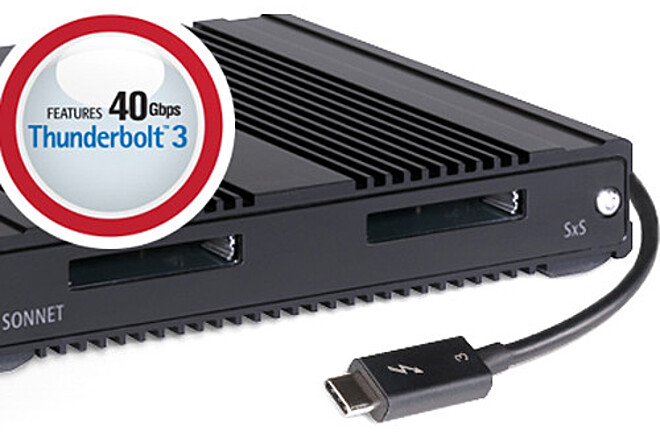 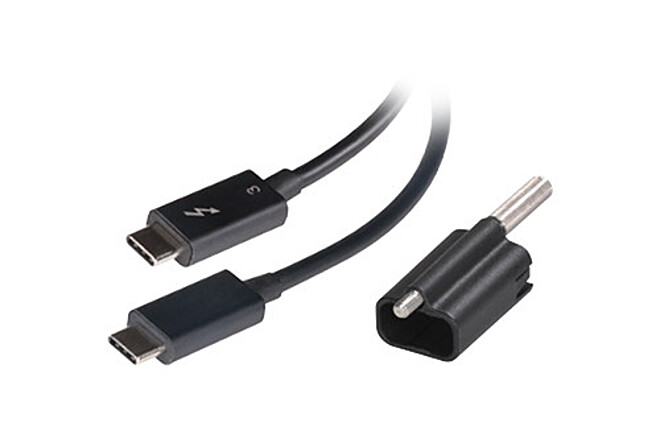 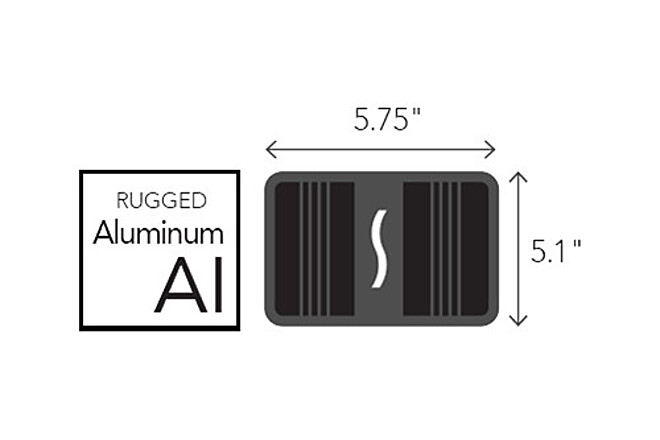 Take advantage of the speed and power of Thunderbolt 3 to transfer content from your SxS media, including SxS PRO+ E Series cards, to systems running Windows 10 (64-bit) or macOS 10.12.1 and later using the SF3 Series Thunderbolt 3 SxS Pro Card Reader from Sonnet. In addition to SxS compatibility, XQD and SDXC cards are supported using an adapter, and Mac users may use this card reader with Thunderbolt 2 or Thunderbolt connectivity by way of a Thunderbolt 3 to Thunderbolt 2 adapter. Using the 40 Gb/s Thunderbolt 3 bus, Sonnet's SxS Pro card reader can operate at speeds up to 2750 MB/s using its dual SxS card slots. It is equipped with dual Thunderbolt 3 ports, one of which connects to your host system, while the second can be used to daisy-chain up to five additional devices, including additional card readers, two 4K displays @ 60 Hz, or one 5K display @ 60 Hz. If your connected device requires additional power, 15W of bus power is provided. In additional to support for Thunderbolt 3, the second port also supports 10 Gb/s USB 3.1 Type-C. PRODUCTIVITY ENHANCER: Sonnet's SxS Pro Card Reader is a is equipped with dual card slots and takes advantage of Thunderbolt 3's 40 Gb/s bandwidth to ingest files simultaneously from two cards at more than double the average speed of USB 3.0 card readers. Using the Sonnet SxS reader enables you to ingest footage from multiple cards in less time for a more efficient workflow. THUNDERBOLT 3: The SF3 Series SxS Pro Card Reader includes two Thunderbolt 3 (USB Type-C) ports. The first connects it to your computer, while the second supports daisy chaining of up to five additional Thunderbolt peripheral devices to a single port on your computer. The reader includes 10 Gb/s USB 3.1 support, meaning you can connect a USB device to the second port using the proper cable or adapter. The SxS reader also provides full support for connecting up to two 4K displays @ 60 Hz or one 5K display @ 60 Hz. For connected devices requiring extra power, 15W is provided to power other devices using the USB bus, such as the SF3 Series CFast 2.0 Pro Card Reader. Compact, Rugged, and Stackable - Ingest Four or More Cards Simultaneously The SF3 Series SxS Pro Card Reader measures 5.75" wide by 1" high by 5.1" deep, making it suitable for use in most workspaces. Its extruded aluminum shell makes it lightweight, yet rugged enough to be transported in an equipment bag. It is also designed to be stacked, allowing for multiple readers, such as additional SxS Pro card readers and Sonnet's CFast 2.0 Pro card readers to occupy the same footprint. This SxS reader enables you to daisy-chain multiple readers to ingest four, six, or more cards simultaneously, taking advantage of Thunderbolt 3's bandwidth of up to 2750 MB/s. THUNDERBOLT 3 CABLE AND THUNDERLOK 3 INCLUDED: Sonnet includes a 1.6' Thunderbolt 3 cable to connect the SF3 Series SxS Pro Card Reader to your computer and a Sonnet ThunderLok 3 Thunderbolt connector retainer clip to secure the cable to the reader. Accidental cable disconnect can lead to data loss and Sonnet's ThunderLok 3 helps to secure the Thunderbolt 3 cable to the SxS reader. It is easy to install and use - just slide it over one end of the cable and then plug in the connector and secure it to the reader by turning a thumbscrew. Because of its design, ThunderLok does not attach to the connector, but remains on the cable so it won't get lost when it is not in use. COMPATIBLE WITH THUNDERBOLT 2 AND THUNDERBOLT MACS: This card reader can be used on Macs equipped with either Thunderbolt 2 or Thunderbolt technology, provided an adapter is used, such as Apple's Thunderbolt 3 (USB Type-C) to Thunderbolt 2 Adapter. There is no Thunderbolt 2 or Thunderbolt compatibility for Windows. MacOS AND WINDOWS COMPATIBLE: When connected to a Thunderbolt 3 port, this card reader is compatible with macOS 10.12.1+ and Windows 10 (64-bit), version 1703 or greater. UPC: 732311012259
Read More 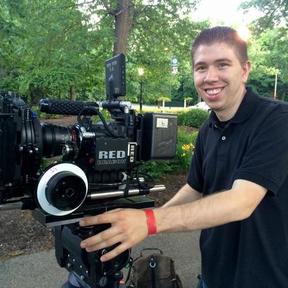