Hiring? Try ShareGrid Gigs - the job board for creators, and creative companies. Post gigs for free and reach over 118,000+ verified filmmakers, photographers, and creators. 🎉
FOR HIRE
Kaleb Seaton (Twelve Spies)
362 (100%)
Hey there! Kaleb here. I’m the owner and operator of TWELVE SPIES, a photo and video company based in Los Angeles. From small photography needs, to large scale cinema filmmaking, I've got everything your production might need! Open 24/7 including weekends, nights, and last minute orders! Will typically be heading to bed around 10pm so holla at ya boy before then though! We are also able to customize orders, so please don't hesitate to message to build a package! Check us out on our socials: Twelve Spies Rentals: @twelvespiesrentals Kaleb: @KalebSeaton Website: www.twelvespies.com/rentals
Photographer
Portrait Photographer
Wedding Photographer
Wedding Videographer
Director
2+
FOR HIRE
Daybreak Lighting & Camera
383 (100%)
Daybreak Lighting & Camera is a boutique rental company started by a USC alum, cinematographer, & photographer. We rent out a lot of lighting & grip equipment including the highest quality Aputure LED lighting fixtures. If you need any equipment that has not been listed, do not hesitate to reach out.
Photographer
Editor
Gaffer
Grip
1st AC - Focus Puller
2+
FOR HIRE
Rug and Vase
50 (100%)
Cinematographer and photographer, born and based in LA, raised in Aleppo, Syria. Speaks Arabic, Hebrew, and Spanish.
Photographer
Music Video Director
Videographer
Director
Cinematographer
Justin Ogden
144 (100%)
I'm a freelance filmmaker, photographer, and the owner of too much gear that I'm willing to share! Feel free to hit me up with any questions and if you're looking for something special or a package.
Photographer
Director of Photography
Camera Operator
Director
Approved Solutions LLC
86 (99%)
We are Approved Solutions LLC, KC Click & Streamline HQ, a family film making creative team. We recently finished our festival run for our short film, DOPE MISTER DEE winning Best Short (under 10 minutes), Best Youth Actor & Best Director (Silver) awards at the Anaheim International Film Festival. Actor, Producer, Editor, Writer, Rotoscope, Photographer Join our tribe; www.carsonseverson.com IG @kc_click_streamlinehq IG @carsonjseverson
Photographer
Actor - Film & Television
Editor
Producer
Benji Lanpher / BS Worldwide LLC.
534 (100%)
*** Returning clients and renters! I moved locations from Hollywood to North Hollywood, I’m about 8 min from the usual spot. Cinematographer, Director of Photography, Photographer based in Los Angeles. All gear gets wiped down and select gear gets put through our UV light before going out and after return to help secure safety with Covid 19. https://www.cinema5d.com/interview-vice-on-hbo-dp-benji-lanpher-exclusive/
Photographer
Director of Photography
Cinematographer
FOR HIRE 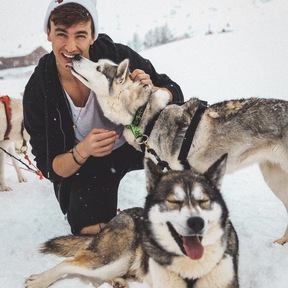 K Explore LLC
94 (100%)
24/7 Pickup and dropoff Willing to work with anyone on any budget and will create custom packages to fit your needs. Send me message with any questions! Content creator and Cinematographer/photographer
Photographer
Drone Operator / UAV Pilot
Producer
Actor - Commercial
Director
2+
LA Film Rentals
420 (100%)
Why rent from LA Film Rentals? • Lowest prices • Friendly & knowledgeable customer service and support • Pickup and drop off 24/7 via our No-Contact Trailer Lockbox • A wide variety of rental equipment to choose from • Name Brand, High Quality, Reliable & well-maintained gear • Safe and secure anytime pickup/drop off location • Located in the North San Fernando Valley ____________________________________________________________________________ *** NEW RENTERS TO LAFR MUST PROVIDE A VALID ID PRIOR TO RECEIVING THE LOCKBOX CODE. WE REQUIRE SOCIAL MEDIA LINKS ADDED TO YOUR SHAREGRID PROFILE *** ____________________________________________________________________________ LAFR is a Los Angeles-based Film Equipment Rentals Company featuring pro-quality, tested, and well-maintained gear. We are here to help you get the gear you need to make your production a success. Renting Requirements: A valid driver's license is required for rentals. If your id is from out of state, an additional form of identification with the same name on it will be required for first-time renters and authorized persons for pickup. No exceptions. Production Rental Insurance is required. COI or purchased Athos insurance through ShareGrid during checkout. Equipment will not be released without proof of insurance. No Exceptions. Issue a Cert in our Name and address and email it to coi@lafilmrentals.com or upload it in ShareGrid Messages. PICKUP/DROPOFF LOCATION: Were located at 22537 Schoolcraft Street, West Hills, CA 91307 PICKUP/DROP OFF HOURS: 7 Days a Week/24 Hours a day ( Pickup your rental anytime after (12:00 am ) on your pickup date ) You will need the 4 digit Trailer Lockbox code to access the lockbox and retrieve or return your rental. You can drop off early or anytime before (11:59 pm) on the drop off date. SECURITY & YOUR SAFETY Our location is littered with lights, cameras, and armed police response. You are safe to travel and do transactions in this location with peace of mind. Our location is easily accessible for all vehicles and our trailer lockbox is also monitored. Feel free to use the driveway for loading and unloading. INSPECTION All items are inspected before departure and upon return. A cleaning fee may apply if the equipment is returned after being used in harsh environments. If equipment requires repair or replacement, an estimate will be furnished to repair or replace the item(s). LOST, MISSING, OR DAMAGED ITEMS If the item(s) are damaged or not returned, you will be responsible to reimburse for repair or replace the missing item(s). Items, not ours returned by accident: We will do our best to notify you when you return something that doesn't belong to us. We will hold the item in our lost and found for 90 days. COMMUNICATIONS If you lose or break something, please let us know. Failure to communicate with us for late rentals or damaged items is not professional. if an issue is not settled after the rental return period has elapsed will be considered abandoned and we move to recovery. If something happens, please let us know, we're more understanding than you think... and remember, you're insured. DELIVERY & SHIPPING: Sorry, we do not offer delivery or shipping. REFUND POLICY: We will offer a full refund for defective equipment only which is very rare. With technology, you can only prepare and predict so much. Please test before your shoot. No refunds on rentals if you don't know how to work/use the equipment you rented. How-to manuals are only a google search away and available on the rental item listing on sharegrid. CANCELLED SHOOTS: if your shoot gets canceled, before pickup day - full refund. On or after pick up day - we can't offer a refund as your reservation prevented another renter from renting the gear, however, we will offer a 50% credit of the current rental rate off your next rental if you don't pick up the equipment or return within 1 hour after the rental item(s) are picked up. *Stingers (extension cords) are included with all rentals requiring AC power. *Power Blocks ( Outlet Strips ) are also included by request. **Sand Bags are always included with all c-stand and combo stand rentals ( Various weights available ) Please be advised - We perform social media, IMDB, and google references for our background search before approving a rental. - We reserve the right to refuse service to anyone. We accept id cards, a valid Drivers License or Passport, and if out of state, another form of ID with the same name will be required. If we determine the presented license is fake or invalid, we will be forced to notify the authorities. AGE: You must be at least 18 years of age or older to rent from LAFR or have a parent or guardian with valid credentials request the rental for you. We look forward to providing you with reliable, well-maintained production equipment for your next adventure and we thank you for your business!
Photographer
Production Coordinator
Musician
Production Manager
Technical Director
22+ 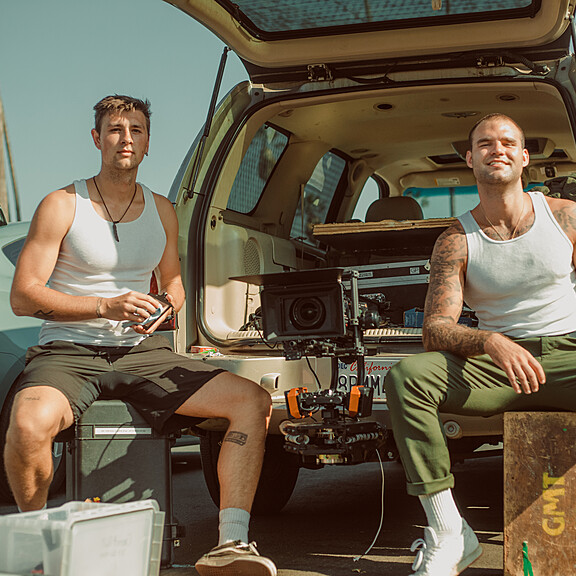 Garrett Paull
81 (100%)
Garrett Paull | 24 yrs old | Encino, CA | Jack of all traits - Director, DP, Editor | Hire me: 317-362-9524 | Instagram: @G.PAULL
Photographer
1st AC - Focus Puller
Director
Editor
Director of Photography
FOR HIRE
Alen Kajtezovic
7 (100%)
i create content.
Photographer
Street Photographer
Videographer
Video Editor
Thomas Hunt
2 (100%)
Previous photo video professional with a Digital Media degree, now just a hobbyist for my own pleasure. I shoot both photo and video, model/fashion, action, and vlogs mostly. My current job is a motorcycle mechanic, and avid motorcyclist at the track mostly.
Photographer
Retoucher
Video Editor
Editor
Lighting Crew
5+
FOR HIRE
Mark Anderson
2 (100%)
My name is Mark Anderson, I’m a director, camera operator and editor. I grew up in the backwoods of Michigan, however I now reside in Orange County, CA with my wife, Chelsea. I specialize in short form documentaries, brand stories and product videos. Since beginning full time production work in 2012, I’ve had the opportunity to tell stories for a number of different charities and has become a primary focus for my work. I also really enjoy working with startups and within collaborative partnerships focused on telling rich stories. Please feel to drop me a line anytime with your project or just to say hello!
Photographer
Video Editor
Videographer
Pierre Tsigaridis
29 (100%)
French Director of Photography. I have my own equipement and looking forward to collaborating with you!
Photographer
1st AC - Focus Puller
Best Boy Grip
Cinematographer
Director
1+